Relations between Portugal and Turkey*

by Unknown
"Turkey is a new republic who succeeded the Ottoman Empire, has founded thirteen years after the Portuguese Republic, by Mustafa Kemal Atatürk. Atatürk created a motto that defined his External Politics “Peace at Home, Peace in the World”, this motto still in use by the new government. Turkey have borders with more eight countries, two of them in the european side both in the European Union, Bulgaria and Greece. Cyprus it’s also a neighbor of Turkey that is an European Member, which has caused some problems in the relation Turkey-European Union. Turkey is located in an important region of the Mediterranean Sea and it is divided in two continents by the Bosphorus Strait, an important strait for passage of Russian ships full of oil. This localization confers to Turkey one big geostrategic and geopolitical importance.

Turkey have approximately seven times more population than Portugal, and in terms of territory it is eight times bigger than Portugal. Both the countries have in common the fact that they belong to the North side of the Mediterranean and are in the extremity of Europe, as well the fact to share the membership of some International Organizations, for exemple the North Atlantic Treaty Organization which Portugal was a founding member, Turkey just became member after three years.

In 1975 ended the “Estado Novo” in Portugal and in the next year ended in Turkey the one-party system prevailing since the creation of the Turkish Republic. In opposite to Portugal where now force a semi presidential system, Turkey it is now one parliamentary republic where the President is not elected directly by the people, in this way the President can not practice freely the powers that the Constitution of Turkey confers to him. The current President is Abdullah Gül and the Prime Minister is Recep Tayyip Erdoğan, both from the political party “Adalet ve Kalkınma Partisi – AK Parti”. Recep Tayyip Erdoğan is in the power since 2002, is now in his third and last mandate as Prime Minister. In 2002, for the first time in the Turkish history one political party won with absolute majority in the Grand National Assembly of Turkey.

Before 1959 Turkey started the negotiations with European Union, but these negotiations had ups and downs because of the coups d’etat, which made the European Union cease relations with Turkey and also because of a strong opposition from Germany and France to the Turkish candidacy. However Portugal maintained its support to the Turkish candidacy. Portugal considers Turkey an asset to the European Union and also expects a change in the balance of power in the European Parliament, which can be more favorable to Portugal since the number of Turkish MEPs will exceed the German MEPs, this alteration will bring more visibility to the countries of South Europe, this can be beneficial to Portugal.

The relations between Portugal and Turkey started in 1843 but only in 1957 both the countries started to have permanent diplomatic delegations in their capitals. Not even the attack on the Turkish Embassy in Lisbon in 1983 prevented the good relations that both countries have nowadays. Since 2009 when the President of the Portuguese Republic Cavaco Silva went to Turkey the State visits between the two countries increased. The last State visit was from the President of Turkey Abdullah Gül in May of 2013, where the two countries started summits which will be held during the coming years in order to strengthen economic relations between the two countries. These summits were agreed in Ankara in late 2012 by the Prime Ministers of both countries.

Portugal and Turkey have come to support each other in international matters, one of these examples is the candidature of the both countries to a seat as Non-permanent Member of the Security Council of United Nations, Portugal had the Turkish support to the seat in the biennium 2011-2012 and now is Portugal who supports Turkey to a seat for the biennium 2015-2016. The current situation in Syria it’s also one of the matters where Portugal and Turkey share concerns.

Portugal is one of the few countries in Europe with a small Turkish community resident, can be around three hundreds Turkish, nevertheless the number is bigger than the two hundreds Portuguese living in Turkey. Since 2012 the Assembly of the Republic of Portugal have a Parliamentary Friendship Group Portugal-Turkey, with the goal to promote the relations between the two Parliaments, not only in political terms but also in cultural, economic and social terms.

Turkey is member of the Customs Union since 1996, which caused an increase of business relationship with Europe, however the economic relations between Portugal and Turkey are far from the maximum potential, the summits before referred will help the two countries to promote the trade.

Since 2009 the portuguese companies have the support of one delegation in Turkey from the Agency for Investment and Foreign Trade of Portugal (Agência para o Investimento e Comércio Externo de Portugal - AICEP) which have the goal of promoting the contact between the local companies in the way to further the integration of these companies in Africa where Turkey want increase their presence, Portugal will serve as link between Turkey and Africa mainly in the Portuguese-speaking African countries. In the other side Turkey can facilitate the connection of the portuguese companies to the central Asia. Turkey is represented in Portugal since 2011 by the Chamber of Commerce, Industry and Tourism Luso-Turkish which promote the bilateral relations. Assisting the portuguese companies there is a Chamber of Commerce and Industry Portugal-Turkey created by a portuguese in 2010.

In the last year Turkey was in the 17º place as costumer of Portugal and in the 48º place as supplier of goods. Portugal in relation to Turkey was in the 52º place as costumer and 51º place as supplier of goods in 2012. In 2011, for the first time, Portugal have a surplus balance of trade with Turkey, in 2012 Portugal repeated the feat. The number of companies exporters to Turkey had a few increase since 2007 coming to 621 companies in 2012, the number of portuguese companies importers had a large decrease since 2007, whereas in 2012 were only 699.

In 2012, the products that Portugal exported to Turkey were led by chemical products; machinery; mineral fuels; plastics and rubber and finally cellulose and paper folders. The main products imported by Portugal were chemicals, base metals, vehicles and other transport equipment, textile materials and mineral fuels. 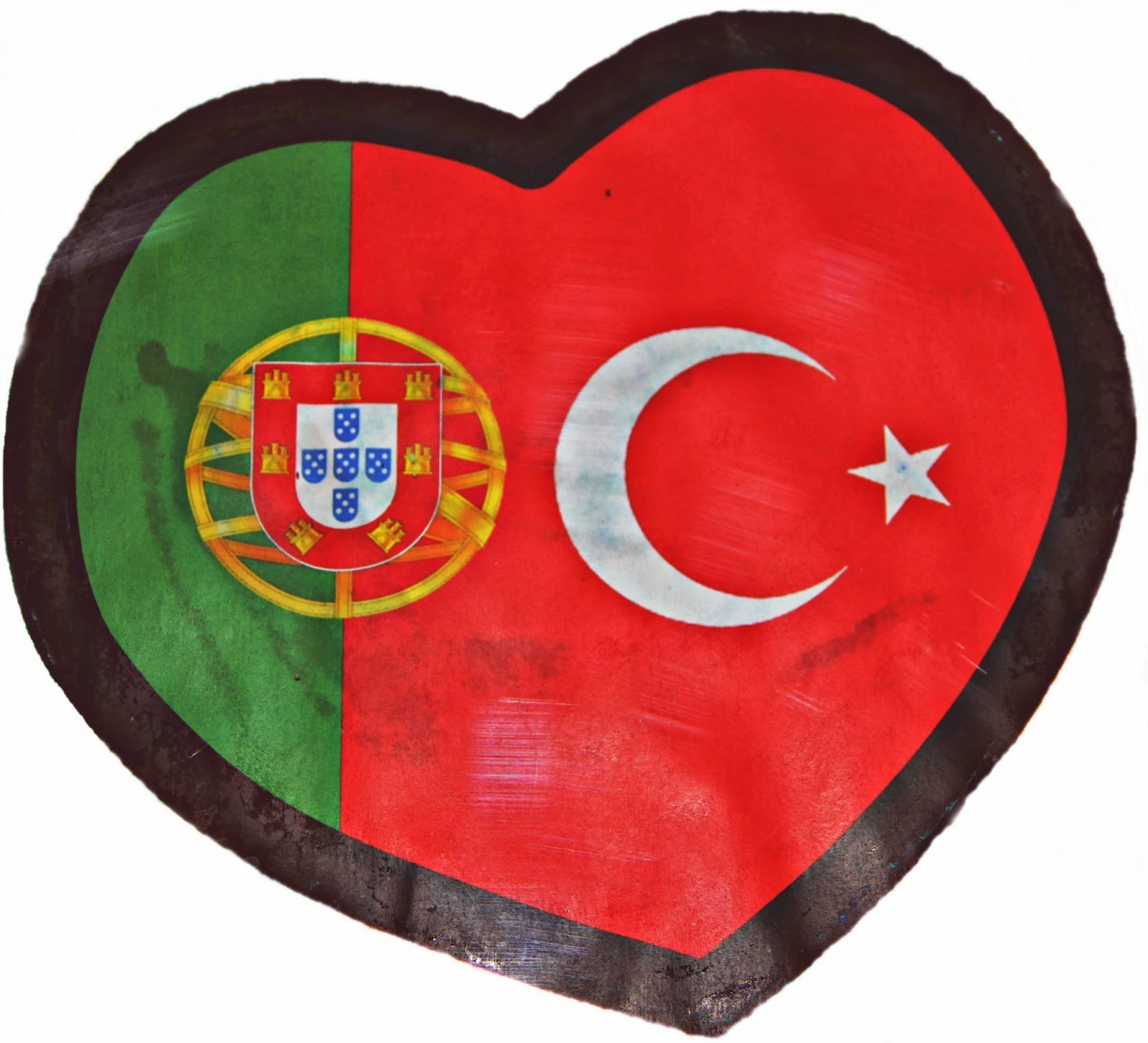 The services balance between the two countries have not good results to Portugal. Since 2007 exists a constant debit balance, in 2012 was 16,5 million Euros.

Data from the Bank of Portugal show that turkish investment in Portugal between 2007 and 2012 are practically absent, in the years 2007 and 2008 are null, however Portugal in 2007 was between the 10 countries with more investments in Turkey.

The tourism is one of the most important sectors to the economy of both countries, but the income generated by Turkish tourists in Portugal still low, in 2012 was only 3 million Euros.

The cultural relations between Portugal and Turkey are developed by Instituto Camões, which is represented in Turkey by the Leitorado Instituto Camões in Ankara, there is a protocol with the University of Ankara to teach portuguese language. In Portugal there is, since 2006, a Association of Luso-Turkish Friendship that promotes turkish culture and language in Lisbon and Porto.

Portugal and Turkey are not neighbors but in a globalized world as the current we all are world neighbors and knowing this we can take advantage and solve our own problems. The Mediterranean Sea which features both countries is more than a cultural link, is the proof that we have more in common than what we think we have. We are two people with a great history already passed, but we can together build one new history to the future."

*Formerly published in Portuguese in the second newsletter of State Building and Fragility Monitor (August 2013), that is a research project of the Instituto do Oriente and Instituto Superior de Ciências Sociais e Políticas
Tag's: A Europa, Portugal, Relações Internacionais, Turquia
0 comentários
Enviar a mensagem por emailDê a sua opinião!Partilhar no TwitterPartilhar no FacebookPartilhar no Pinterest

by Unknown
“To the complaint, 'There are no people in these photographs,' I respond, There are always two people: the photographer and the viewer.”
Ansel Adams
Tag's: Citações
0 comentários
Enviar a mensagem por emailDê a sua opinião!Partilhar no TwitterPartilhar no FacebookPartilhar no Pinterest